Raeford, N.C. - The marathon phase of the USEF National Single Horse Driving Championship, which is being held in conjunction with the Southern Pines CDE, proved to be a back-and-forth battle between two of America's most experienced drivers. Leslie Berndl and Suzy Stafford traded quick times through Richard Nicoll's eight-obstacle marathon course on a picturesque day at the Carolina Horse Park. While Stafford was able to capture victory on the marathon, it is Berndl who will drive last in the cones as the leader of the National Championship at the conclusion of two phases of competition.


Berndl (Newcastle, Calif.) and her own 13-year-old KWPN gelding, Uminco, headed onto the marathon with the overnight lead after winning the dressage with a score of 34.24, and a 4.65 lead over Stafford. The 2013 USEF National Single Horse Driving Champions posted competitive scores throughout each hazard including driving the fastest time in obstacle two and placing second in obstacle four. Additionally, they continued their pursuit to back-to-back titles by driving the third quickest times in obstacles one, five, six, seven, and eight on their way to finishing the marathon on a score of 79.43 in second place.

Berndl heads into the final cones phase on a total score of 113.67, giving her more than a three-point cushion over the field.

Stafford (Wilmington, Del.) and her own PVF Peace of Mind currently stand in second place in the Championship with score of 117.35. The three-time USEF Single Pony Champion, utilized her vast experience with the seven-year-old Morgan as they won the first and third obstacles, and posted second-place scores in obstacles five, six, and seven. On their way to winning Saturday's marathon on a score of 78.76, the Live Oak International winners also placed third in obstacle four.

Kate Shields (Middleburg, Va.) held her third-place overall standing with her own 13-year-old Welsh Cob gelding, Hastening Winslow, on a two-day score of 138.78, after placing seventh on the marathon with a score of 95.64.

Championship competition comes to a close on Sunday with the cones phase. 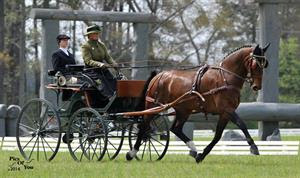