By winning the marathon, Koos de Ronde has moved up on the leaderboard to just less than two points behind dressage winner Chester Weber. The excitement will continue to build until tomorrow afternoon when the four-in-hand horses will drive the cones course. There is a little less excitement for the National title as de Ronde has a substantial lead over the rest of the field and is looking to collect his fifth National title.

Due to the extreme temperatures the organization decided to shorten the sections and remove obstacle four from the course. Even with one obstacle less, there was still a huge shake up on the leaderboard in the four-in-hand division. American Chester Weber finished the marathon in seventh place and while managing to hold on to the lead, he now does not have any room for mistakes.

The brothers Koos and Peter de Ronde both drove excellent marathons and finished in first and second place. Peter drove in five of the six obstacles constantly the fourth fastest time and Koos had the fastest time in four obstacles. Mark Weusthof was extremely close to Koos’ times up until the last obstacle when he ran into trouble. “The horses were going so well, but I had chosen a fairly difficult line in obstacle seven. A, B and C went well, but then I missed gate D. This unfortunately cost me too much time and I gave up my second place in the marathon.” tells Weusthof. Weusthof’s chances of gold on the podium are slim, but he still hopes to bring home that silver medal tomorrow. 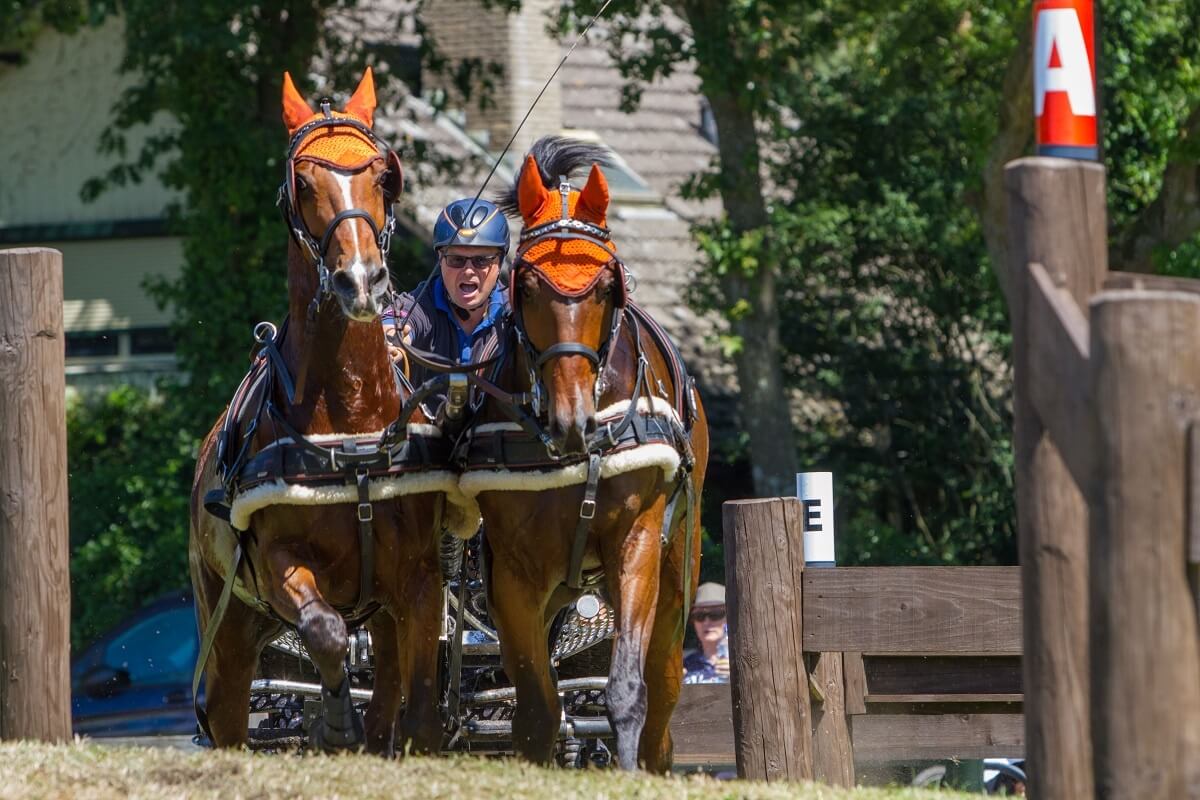 Dutch pair team in the lead

For the pair drivers the competition in Beekbergen was an excellent chance to test drive the obstacles of experienced course designer Barry Hunter, who will also be building the course at the World Championships this year. The Dutch drivers definitely made a name for themselves in the marathon, taking the first through to the sixth place. Raymond Letteboer did a repeat of his marathon victory in Valkenswaard, clocking the fastest time in four of the six obstacles. When asked about how he fared with the warm weather Letteboer replied: “It was not a problem, enough measures were taken to ensure the well being of the horses.” Letteboer has moved up to the seventh place in the provisional standings. “I’m hoping to move up a few places after cones, or at the very least hold on to my current placing.”

Finishing just behing Letteboer are Antonie ter Harmsel and Stan van Eijk. Ter Harmsel has moved up to the fourth place with just 0,05 points separating him from the podium. Martin Hölle despite an eleventh place finish in the marathon has retained his lead and still sits in first place.

Edith Chardon had her ponies in good form and won the marathon in the VIP class extending her lead overall.

Para driver Jacques Poppen drove the fastest time in four obstacles, but it was not quite enough to surpass his rival Francisca den Elzen. There now sits less that a ball between the two going into cones tomorrow.

Sunday will begin with cones for the para drivers, followed by the pair horses. In the afternoon the four-in-hand horses will drive and we will name a new Dutch four-in-hand champion.