Yesterday and today, the dressage was driven in Exloo with beautiful weather conditions. It is only March and that means that in the morning it’s still pretty cold. That’s why this morning, because of the fog, it was decided to start the competition at a bit later today.

Naturally it is a wonderful start to the season with the beautiful sunny weather. It makes everyone happy. “It makes a big difference if you get out of the car with these conditions, or if you get out and immediately stand in the mud,” says organizer Arjan Kleinjan happily.

The first competition day, single driving was on the schedule. Reigning World Champion Saskia Siebers was head and shoulders above the rest of the competition in the three star test. The judges were unanimous with her presentation and placed her first with a score of 35,57. “I still want to get better”, says the world champion. “Axel was naturally very good in this test, but I am asking more with my driving than before. In that way he is using his hind leg better. I am very happy, but I still see small things that I want to improve.” She is critical of herself and very driven. “You always have to want to make yourself better, otherwise you will be beaten”, she expelains.

The judges were also unanimous about the 2nd and 3rd place finishers. Rudolf Petsman drove Diesel to a score of 46,89 and a 2nd place finish, and the British driver Harriet Bradford followed with a 3rd place finish on a score of 49,33. For the Dutch participants, Christiaan Provoost with Duran H earned a nice 5th place finish (52,77), and a very successful international three star debut for Jeanette Veldboom who competed with two horses. She is in 6th place with her successful horse Risk on a score of 54,11.

Alongside the very full three star competition, there are 6 horses in the two star single driving competition. The only Dutch driver, Peter Zeegers, was the winner with a score of 51,95. 
World Champions in the lead

Today it was the turn of the other tests. Alongside the arena of the Equestrian Center, the public enjoyed the sun, the friendly and fun atmosphere, and the diversity of the tests. In the two star pony pairs, the Dutch youth drivers did a good job. Barely beating each other, Larissa Reints was 1st (with 59,68) and Jorn van Olst 2nd (with 59,81). In the three star competition, it was no surprise that World Champion Rodinde Rutjens took the lead with 44,19. In the four-in-hand Marijke Hammink did the same with 41,9 faults.

In the pairs driving horses the judges could not give any high scores. The Italian Ugo Cei was the best with a score of 62,48 in the three star competition, and Ian Olivier (RSA) presented the best in the two star (57,78). In the Four-In-Hand horses the test of Antonie her Harmsel was rewarded with the winning score of 54,44. Even though the picture was a bit careful sometimes, he drove very securely and there were several very beautiful pieces of the test.

Click here for the photo album of Thursdays Dressage

Click here for the photo album of Fridays Dressage 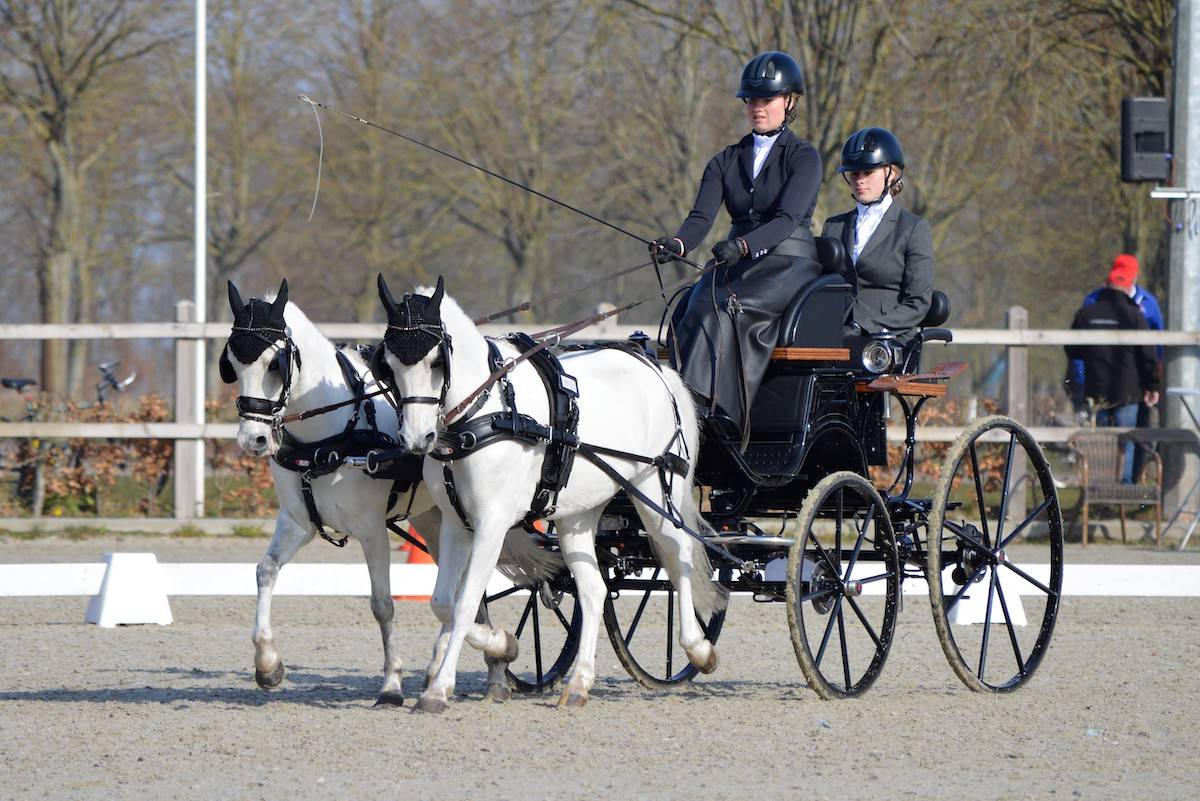