Gothenburg went carriage crazy today as tens of thousands of spectators poured on to the streets and into the city’s Slottsskogen Park to witness a dramatic day of marathon driving at the 2017 Longines FEI European Championships.
Highly experienced Ijsbrand Chardon (NED), who said afterwards that he’d like to drive the city course “every day of his life”, put in a season’s best performance to move into the individual gold medal position, with one more day of competition to come. 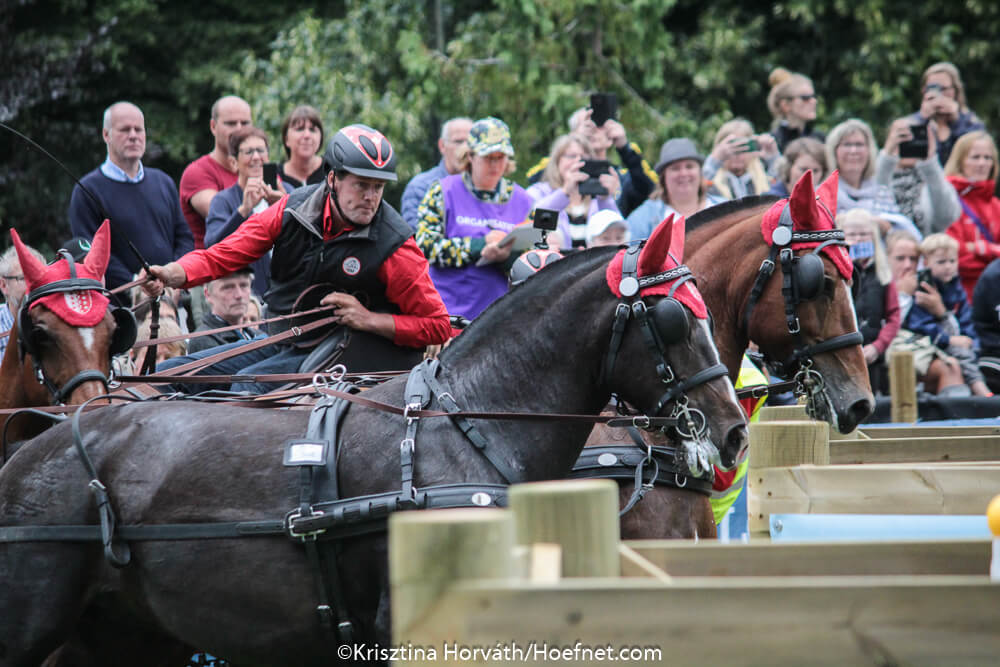 “The atmosphere was amazing to drive in, just amazing! We have many nice competitions but not in the city, it’s so beautiful here, people applauded through the city,” said Chardon.

Chardon and his fellow drivers and horses flew through some of Gothenburg’s busiest streets before being greeted by around 35,000 fans gathered around eight obstacles, featuring deep water, huge trees, modern sculptures and more.

World number one and four-time world champion Boyd Exell (AUS), who is acting as a consultant trainer for the German team this week, predicted on the course that the exuberant Chardon would feed off the crowd’s energy and “feel like a rock star”. He was right. The 56-year-old finished second in the marathon test, enough to put him more than four points clear overall.

“It was unique, the city was the competition and everybody was part of it, it was fantastic,” said Bram Chardon (NED), who acted as back stepper on his father’s carriage.

The 27-year-old Edouard Simonet (BEL) kept his cool amid all the excitement, with a smooth driving display propelling him into silver medal position in the individual event: “I had only one tactic as usual, go as fast as possible and don’t take risks. You have to attack. Even when you make a mistake you must keep your head up and try to fight harder.”

Both men however, had to bow their heads to Switzerland’s Jérôme Voutaz, who flew through the course to take the marathon honours on the day and move up the individual rankings from 20th after dressage to ninth. The 38-year-old, who runs a garage by day, puts his skill with horses down to a great sense of perspective: “My whole day is with cars and driving is how I relax, I am on holiday now.”

The form man of marathon driving, Christoph Sandmann (GER), who won the most recent FEI World Cup™ test in Aachen last month, produced another strong display, finishing third on the day, which saw him leap up from fifth into third overall to challenge for the medals.

His form helped Germany close the gap on the Netherlands in the team competition. The 2015 European Team Championship silver medallists are now less than seven points behind the men in orange.

The Dutch did show their enviable strength in depth however, with Koos de Ronde (NED) stepping up to finish seventh in the marathon, making up for a surprisingly uncharacteristic display from the leader after the opening dressage stage, Theo Timmerman (NED), who has dropped out of the individual medal positions and will start tomorrow’s cones in fourth place.

Belgium remain clear favourites for the team bronze and their leading light neatly summed up the drivers’ thoughts as eyes turned from one of the sport’s great marathon days towards what is set to be a tension-filled final cones test. “A good night of sleep first, let the horses recover as well as possible and then go fast, go clear tomorrow. After today, I think the public really enjoyed it and tomorrow the arena will be fully packed,” said Edouard Simonet.