After a heavy frost last night in Horst, the first pony riders came to the start this morning shivering from the cold. Luckily the sun broke through early warming up the difficult marathon course and bringing out lots of spectators.

Martin Hölle had a sucessful day with the single ponies. Driving two ponies, he now stands in first and third after the marathon with Samantha Pijl squeezing between in second place. In the pair ponies Manon van Kasteren had taken the lead and in the four-in-hand ponies Bram Chardon extended his lead by driving the fastest marathon. The winners of the pony divisions will be decided tomorrow after cones. 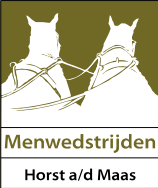