From Thursday June 8th to Sunday June 11th the second edition of Driving Valkenswaard International is on the international driving calendar. Over 75 pair and four-in-hand drivers representing 18 different countries have entered this beautiful competition in Valkenswaard on the grounds of reigning World Champion Boyd Exell. 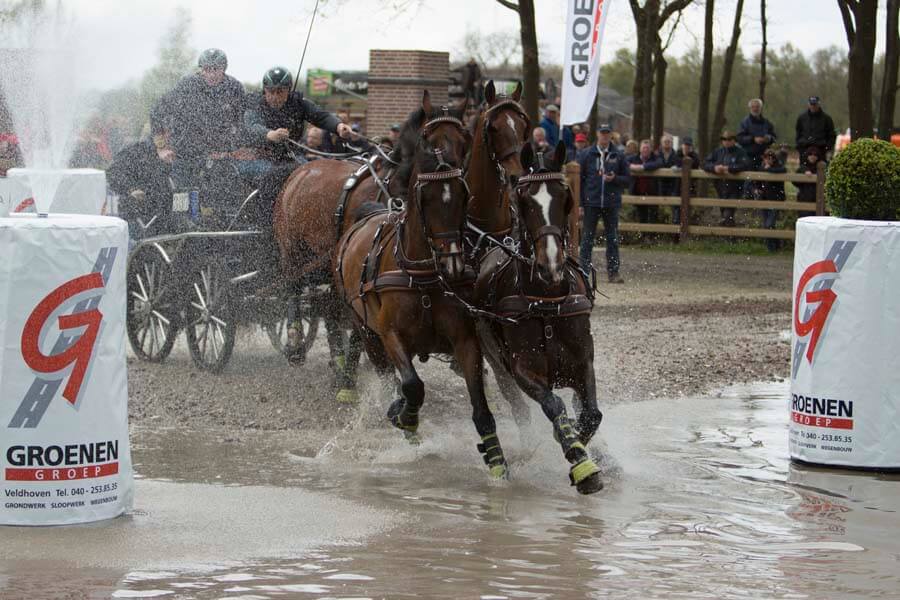 “The number of entries exceeded our expectations,” tells host Boyd Exell. “We planned on having more entries than last year, but had not expected that our competition would generate so much interest. Our goal is to organize a show that is enjoyable for both the competitors and the spectators, as well as maintaining a high level international competition and as such we have added several improvements to our program.”

With this Boyd means among other things, the Bicycle Challenge being held the Thursday evening of the opening party where a number of electric fat bikes will be up for grabs. The competitors will form a team with their marathon groom(s) and accompanied by upbeat music will ride a cones course in the indoor arena. The team with the fastest time wins the new bike, sponsored by Pitt Bicycles in Valkenswaard. Bicycles will also be presented to the second and third placed teams. Following the success of last year, the Pro-Am Challenge for four-in-hands will also be extended to the pair drivers this year. Teams will be formed with one Pro(fessional) and one Am(ateur) driver. It is the idea that the Pro will mentor their teammate throughout the competition with the goal of achieving the best possible results. Several wonderful prizes have also been donated for this competition. New on the program this year is the harness horse show on Sunday afternoon, followed by the Pro-Am Challenge finales driven over a shortened cones course.

There is a new feature obstacle at Driving Valkenswaard International with a substantial bridge, kindly sponsored by Misdee and James Wrigley-Miller of Hillcroft Farm, to be used as a viewing platform for the public whilst competitors negotiate the obstacle underneath the bridge.

Boyd will be challenged on his home turf by the entire German team with Christoph Sandmann, Georg von Stein, Mareike Harm and Rainer Duen making the trip to Valkenswaard. The talented Belgian driver Edouard Simonet who made waves in Windsor when he came very close to surpassing his mentor will have another chance to turn the heat up. The Dutch will be represented by no less than eight drivers including past European Champion Theo Timmerman.

There are currently 49 pair drivers on the list, representing 16 countries, and include Windsor winner Lars Schwitte (GER) and second place Michael Sellier (FRA). Valkenswaard is a home competition for the Frenchman Sellier as his horses are stabled at Exell Equestrian, as is also the case for South African competitor Wayne Van Niekerk. Dutch team coach Harry de Ruyter has made Valkenswaard a selection competition for those wishing to make the Dutch team for the World Championships in Lipica this September.  16 Dutch pair drivers stand on the starting order, including past World Champion Harrie Verstappen who won the marathon in Windsor and 2015 individual bronze medalist and silver team medalist Jozsef Dibak from Italy.

The marathon on Saturday June 10th and the cones on Sunday June 11th will be sent out live via Clipmyhorse.tv.