As the last dressage day came to a close in Kisbér-Ászár the 24 pony four-in-hands World Championship is well under way. Germany was once again dominant with Steffen Brauchle winning the dressage, followed closely by Edith Chardon (NED) and Yannick Scherrer (SUI)


The reigning German Champion Steffen Brauchle was one of the last to drive and his score of 45,31 edged out the Dutch driver Edith Chardon who with just four tenths of a point trails the German. The Swiss driver Yannik Scherrer rounded out the top three with 47,71.

The top five drivers all scored under the 50 penalty points with Marijke Hammink (NED) 48,64 holding on to 4th place and Tinne Bax (BEL) in fifth with 49,18. With the scores so close all eyes will be on these drivers Saturday for the marathon. 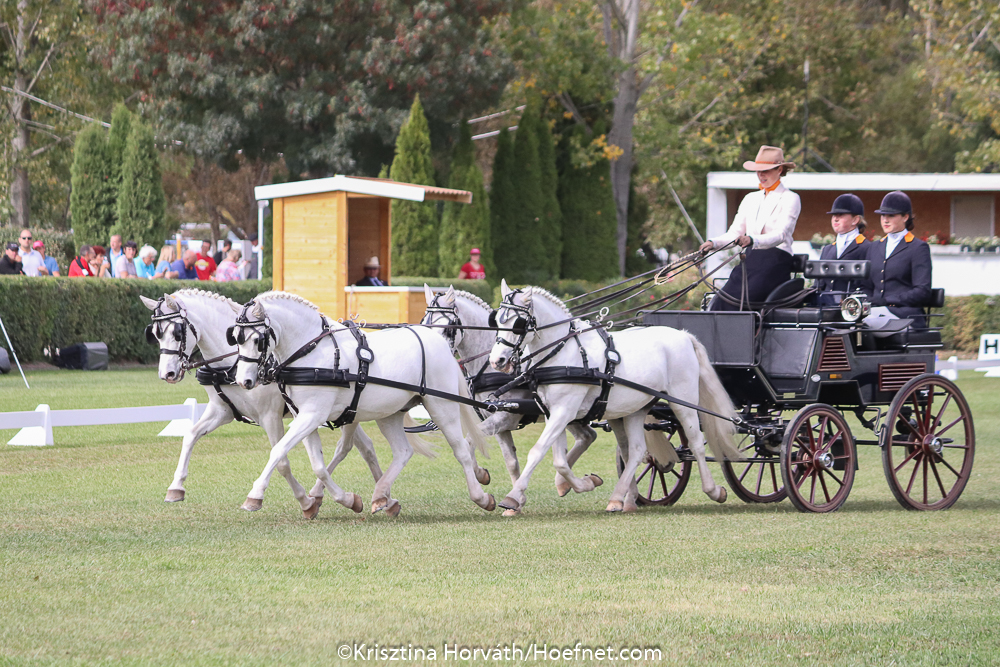 
Gold for the Netherlands

With scores from the singles, pairs and four-in-hands tallied The Netherlands is currently holding the lead in the team competition with Germany a very close second. There is a little breathing room between the top two placings and the Swiss team who currently sits in third. Belgium holds onto fourth place and France in fifth.

Dutch team coach Ad Aarts has looked at the marathon and finds the obstacles long. “The obstacles are long and roomy, so the speed will be high creating a degree of difficulty for drivers who may lose control. It will be spectacular but one or two technical obstacles could have been added.”

Tomorrow the marathon is on the program and the competition will close Sunday with the cones and the crowning of the new World Champions.