Boyd Exell showed his driving skills this afternoon in a nearly sold out Olympia Hall and won the Extreme Driving Class, kindly supported by Karen and Hugh Scott Barrett. Dan Naprous performed very well and finished in second place in this extra class, which does not count for the World Cup. Chester Weber came third in the field of seven drivers. 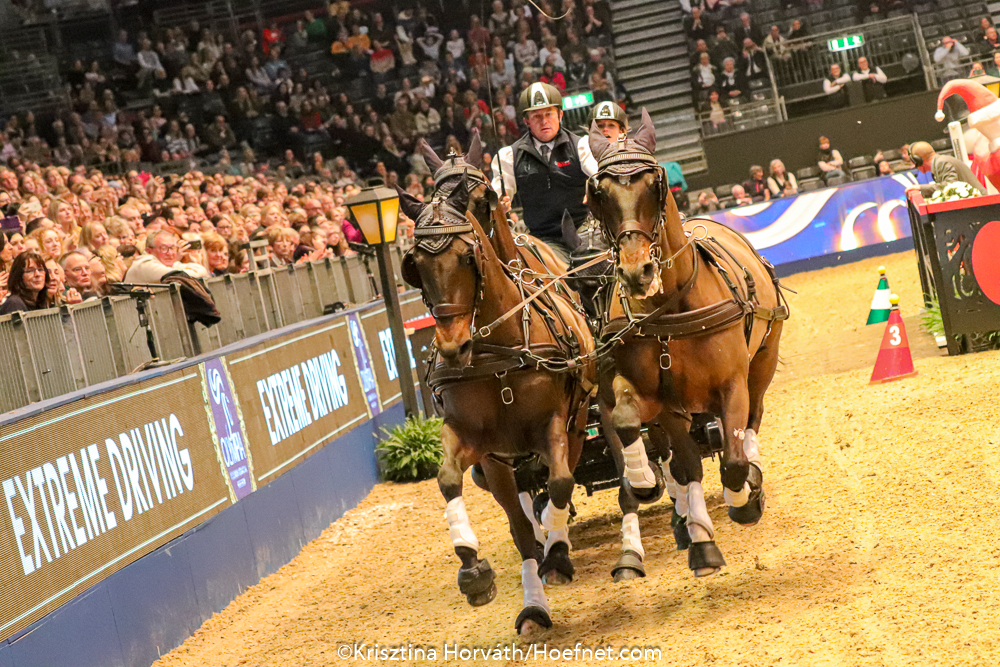 Daniel Naprous was probably the happiest man in the arena this afternoon. The wild card competitor was first to start and drove a fast round in the nice course, designed by Dutch level 4 Course Designer Jeroen Houterman. None of the following five competitors managed to beat his score until Boyd Exell entered the arena and drove the only clear round with Hugh Scott Barrett as his experienced back stepper on the carriage. Both Naprous and Exell as well as third placed Chester Weber qualified for the Drive Off over the same course, in which they started from zero again. After Weber had two faults, Naprous stopped the clock in a superb time of 125,40, which was over three seconds faster than Boyd’s time in the first round. Unfortunately, three knock downs kept him from putting the pressure on Boyd. The Australian five-times World Champion drove a clear round and won despite an extra loop in the first marathon obstacle.

Ijsbrand Chardon set the third fastest time in the first round but had three knock downs and finished in fourth place. Koos de Ronde got extra penalty seconds for knocking over a gate which he had not taken yet and came fifth, ahead of Mareike Harm who missed the speed in her team today. Jozsef Dobrovitz had a miscommunication with his leader horses which resulted in extra seconds when one of the marathon obstacles had to be rebuilt.

The first competition of the FEI Driving World Cup™ is scheduled on Friday at 12.40 UK time for which Jeroen Houterman has designed a completely different course.