World Pair Horse Champion Martin Hölle (HUN) will be part of a discussion panel during the youth sections of the FEI Sports Forum in Lausanne the 26th of March. A large portion of the Sports Forum will be focused on youth this year and the successful 20 year-old Martin Hölle will be representing the driving sport.

Alongside Hölle, the panel is made up of representatives from all seven FEI disciplines, each successful in their branch of the sport. The eight-man panel will be led by a moderator and will discuss the pertinence of age categories, the relevance of competition formats, ways to facilitate the transition between categories, and ideas on pony sport.

Click here for more information on the FEI Sports Forum. 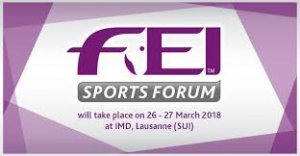