31 horses from 11 nations have competed this week at the FEI World Driving Championships for Young Horses at the National Stud Farm in Mezőhegyes, Hungary. Three young horses were crowned World Champions this weekend, out of which one horse has already won the gold medal last year in the 5-year-old category.


Mezőhegyes has been the host to this Championship since the first edition in 2015 and has improved in many ways since then. The State Stud will welcome the young horses again next year for the 6th time.

While the number of starters was not as high as last year, when in total 39 horses started in the 5, 6 and 7-year-old horses’ categories, the quality of horses and number of presented horse breeds clearly increased. The international Ground Jury was chaired by Joaquín Medina García (ESP), the members were Anne Marie Turbé (FRA), Pia Skar (DEN) and Reiner Wannenwetsch (GER).
The competition was run over four days, including two days of combined dressage and cones, where the drivers had the chance to qualify for the dressage final on Saturday and the Combined Marathon on Sunday.  During the combined dressage and cones test, the judges were looking at the basic paces, the training of the horses according to the training scale and appropriate to their age, as well as the overall impression of the horses. The most important aspects during the combined marathon competition on Sunday were obedience, self-motivation, harmony between driver and horse and potential of the horse in the Driving sport in the future. 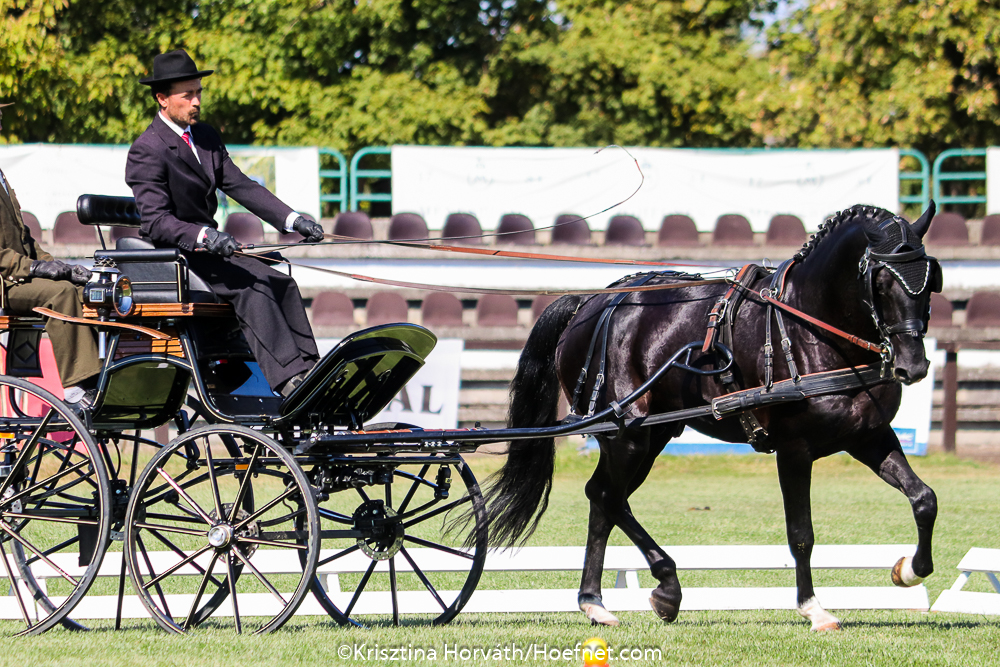 In total four horses received a qualifying (more than 6,00) in the 5-year-old category. All four were from different horse breeds: Lipizzaner, Czech Warmblood, Nonius, and Silesian. The winning score was awarded to a black Lipizzaner stallion from Romania, Neapolitano XXXI-42, driven by Roland István Varga (ROU). In the dressage final the horse received 7,17 from the Ground Jury who found his walk very relaxed and the horse had good rhythm in the working trot with steady contact. There was a good connection between driver and horse in the combined marathon final, which he completed fluently, in a correct tempo. Therefore his final score was 14,27. The second place went to Cody, a Czech Warmblood horse driven by Michal Zak, who finished the competition with a total score of 13.08.
Nonius XIII-9 Adél, driven by János Papp (HUN) a Nonius bred in Mezőhegyes finished on the third place. This brought the National Stud farm a great success, as she is only the second Hungarian horse in five years, who finished on the podium.

The name of Adele M was not an unknown name on the list since she already won gold in the 5-year-old horses’ category in 2018 with Bettina Winkler (GER). This year only one thing changed: Jessica Wächter was her driver, with whom she became the best of her category as well. In the dressage final she was awarded 7,86, the highest point all week. The Saxony-Thüringen Heavy Warmblood mare had an active walk with good overstepping and freedom on the shoulder, a trot with good rhythm and balance throughout the test. Her canter was uphill and in balance. In the combined marathon it was visible that the horse trusts the driver and did everything that she was asked for. She was going forward in a good tempo and on the bit throughout the test. The scores of Adele M suggest that she has very good potential as Driving horse in the future. She received a 9 for all aspects of the combined marathon. Her total score was 16,26.
Dajluk, the Silesian stallion finished second with a score of 15,09, driven by a very experienced driver Weronika Kwiatek, who has been coming to Mezőhegyes every year since 2015.
Last year’s bronze medalist in the 5-year-old category, Finesse 374 finished third again this year in the 6-year-old category. The Westphalian mare was driven by Alexander Bösch (AUT). 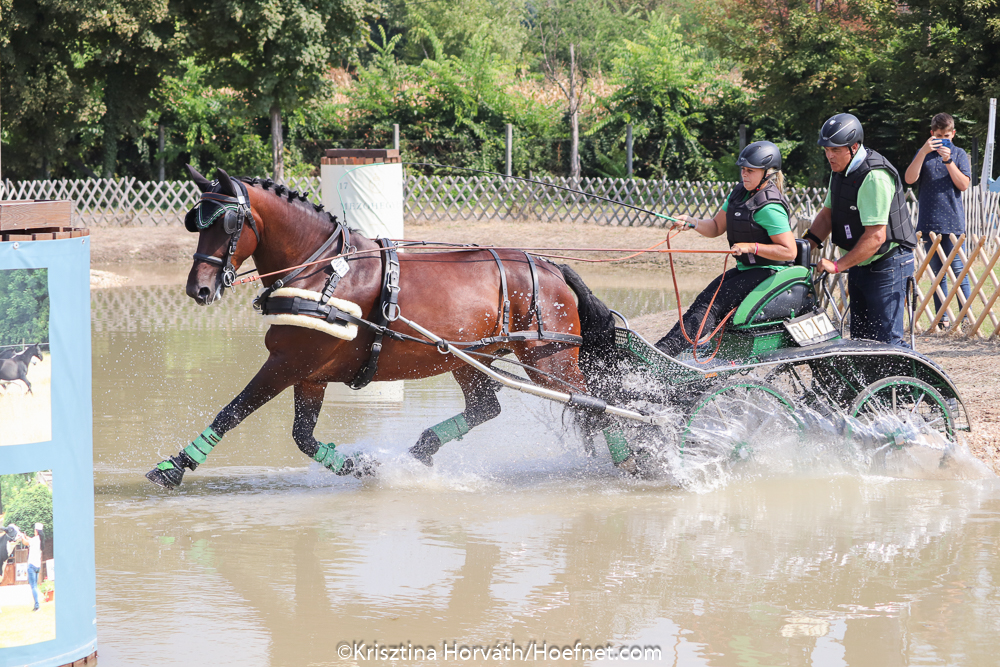 Another great horse driven by Jessica Wächter who impressed the Ground Jury was Novana, a Saxony-Thüringen Heavy Warmblood mare, just like Adele M.
In Saturday’s dressage final the only 9 which was given, was for Novana’s walk that was relaxed, with swinging back and good overstepping. The horse was awarded the highest marks in the combined marathon phase, which she completed in a good tempo, looking clearly motivated. The harmony between the driver and the horse was very visible. She showed clear self-carriage and was in steady contact during the whole test. Novana was playing the game and enjoying what she was doing. Her final winning score was 16,61.
The second place in the combined competition went to Aromat, the winner of Saturday’s dressage driven by Bartlomiej Kwiatek. The Silesian stallion horse received 15,39 points for his performances.
In addition to the third place in the 5-year-old category, the Nonius breed was successful in the 7-year-old category as well. Mezőhegyes Nonius-14 Vezér finished on the third place in the combined competition, driven by János Papp.