Last weekend, Saskia officially announced during her ‘World Championship-party’ that the now 17- year-old Axel is retiring after winning his second world title in a row last season. Due to the many successes, with the two individual gold medals as icing on the cake, Saskia Siebers and partner John Castelijns received a special medal from the municipality where they live, during the party. 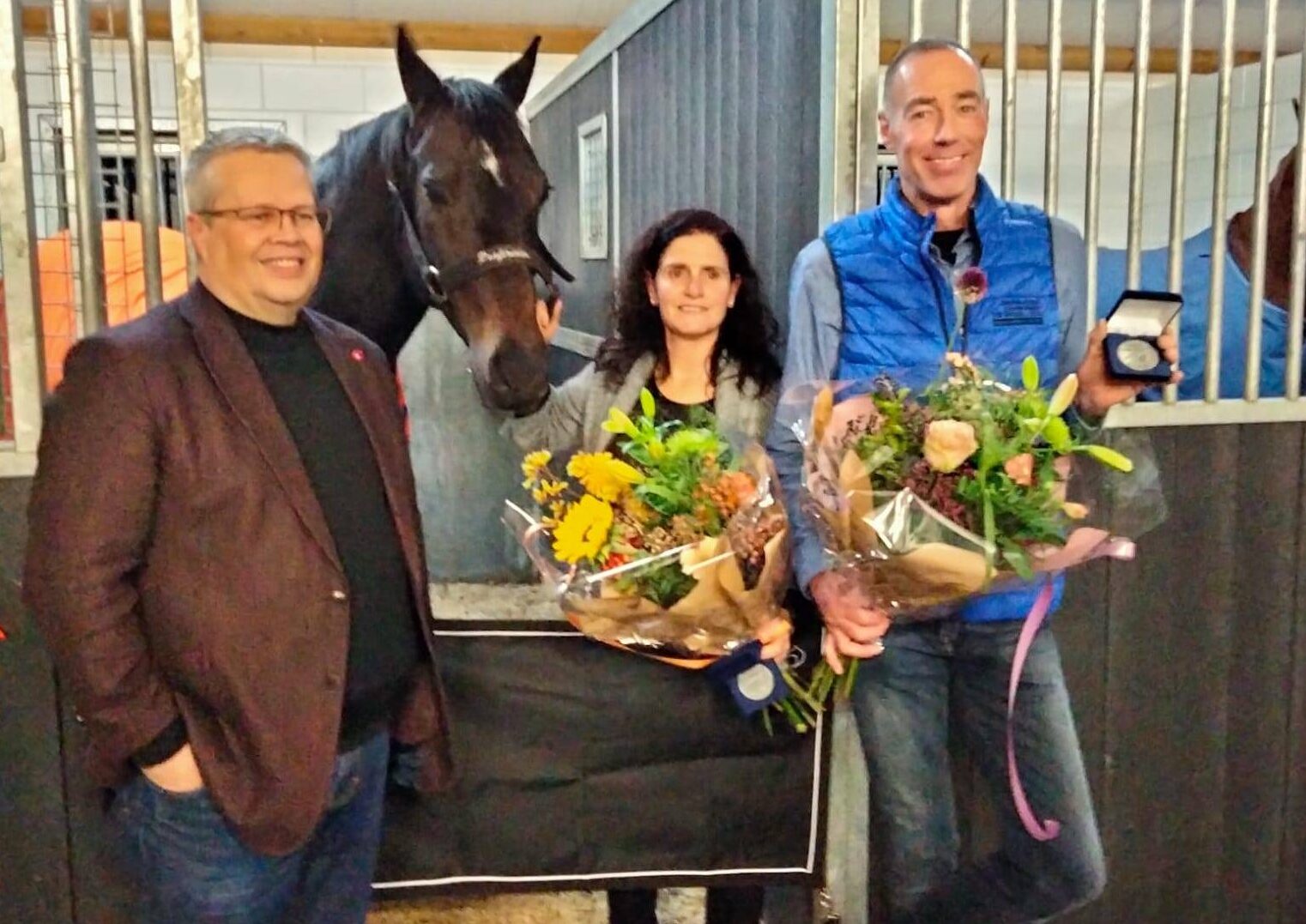 Saskia Siebers and John Castelijns with their prize from the municipality


Not a smooth start

Saskia bought Axel at the age of four. He was then just two weeks under saddle. Saskia provided the training herself. In 2011, when Axel was six years old, they made their debut in the combined driving sport. “We took it easy. I really didn’t want to go too fast with him because I knew he needed some extra time.”

The first competition didn’t go so smoothly. “Axel spooked, I lost a rein and so I had no choice but to send him towards a barrier. We went over that luckily in one piece, but Axel started going even faster. John stood on the back, gripping the reins with his long arms. I accidentally braked with the front brake, which caused the rear of the carriage to rise considerably. As a result, John flew off the carriage and shouted: ‘Don’t press that brake!’ Fortunately, it ended well, otherwise we would not have had this interview”, says Saskia. “In 2014 we were ready to start internationally.”

Highs and lows close together

“The last World Championships in Le Pin au Haras is our highlight, I think. Due to the injury that Axel sustained earlier this year after the marathon of the international competition in Kronenberg, it was suddenly no longer obvious that we would be able to drive that championship at all. We had to give Axel a rest for a long time and then slowly built it up. In previous years we often had everything planned for the World Championships. Not this year because it was uncertain what his recovery would look like and whether the World Championships, where the maximum is asked of your horse, would be realistic. The realization that as a driver, you are nowhere at all if your horse is not fit, that prevailed enormously. I was very happy that we were finally able to drive along; was therefore mainly enjoying driving and a lot less concerned with the result. Perhaps that was also part of the success; that we had a different focus.” Despite this change of focus, they won the individual gold medal for the second time in a row for the first time in the history of driving. 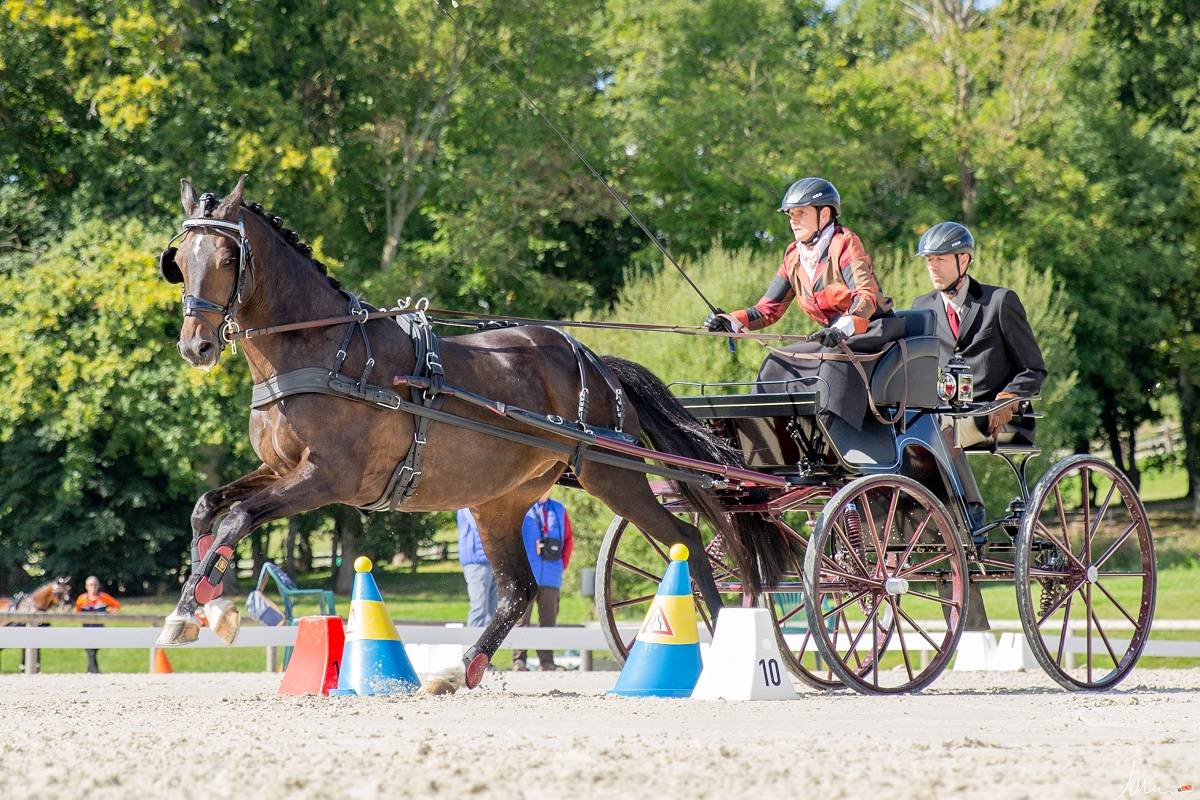 Axel is retiring, but Saskia talks about her and John’s future plans: “I will continue to drive Axel at home. He is still in top shape and I therefore think it is unfair to suddenly put him in the pasture. We will continue to enjoy him without competition goals as long as we can. Last Sunday, for example, John took over the reins and we regularly put him in a pair next to one of our young chestnuts. Axel is so stable, the youngsters can learn a lot from him.”

It will take some getting used to for Saskia and John that after all these years they don’t have a competition goal in mind: “You’re so used to training towards a show,” says Saskia. “It is strange when that suddenly disappears. We are now going to train Noxander (Jakarta x Dramatic) and Nulleke (Jakarta x Londonderry), the two four-year-old chestnuts, all-around in the coming period. They can both do single and pair, and are going under saddle. John drives them in pair, I am a real single driver. That is a perfect combination for them in the lower classes. Furthermore, John is now retraining from ‘forest rider’ to ‘dressage rider’ and in terms of height he fits very nicely on Nulleke, the largest of the two. In addition, I will continue to regularly attend national competitions, because last year I passed the judges course.”

“In the lower classes, I think single and pair driving is a good combination for the chestnuts. If at some point they are ready for the higher work, we will of course have to make a choice. We’ll see what that will be then. We will first enjoy training and then we will find out how they develop. In any case, Axel can set a good example for them in the near future,” laughs Saskia. 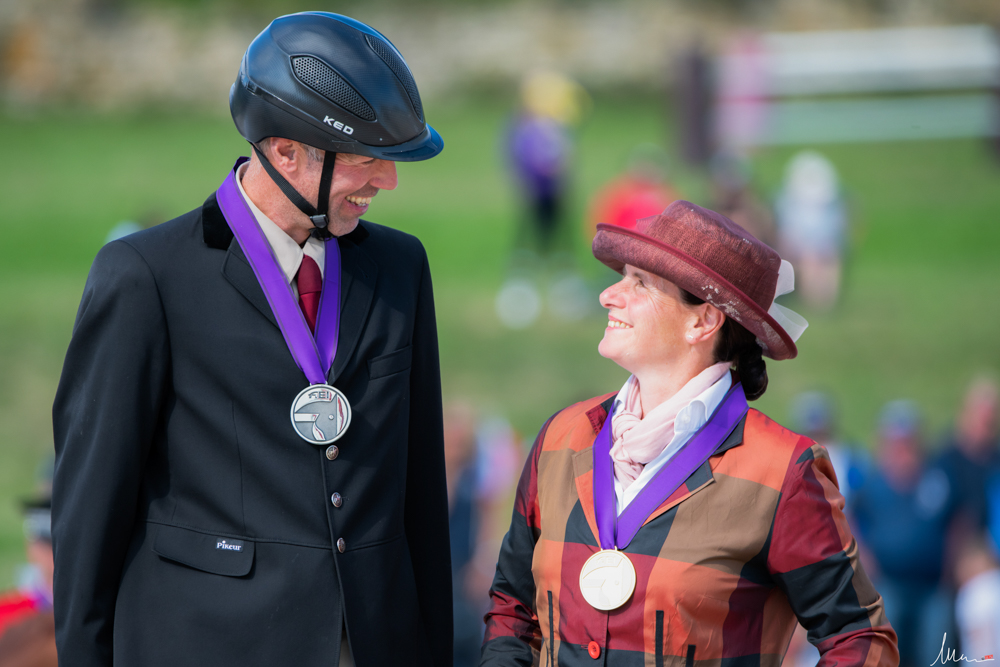 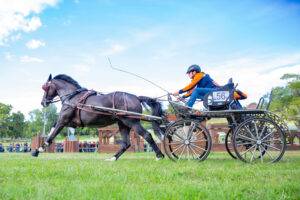