Reigning World Champion Boyd Exell surpassed himself this evening in the FEI World Cup™ Driving Competition in Stockholm, where he won his fourth out of four competitions this season. Koos de Ronde finished in second place, ahead of Glenn Geerts. 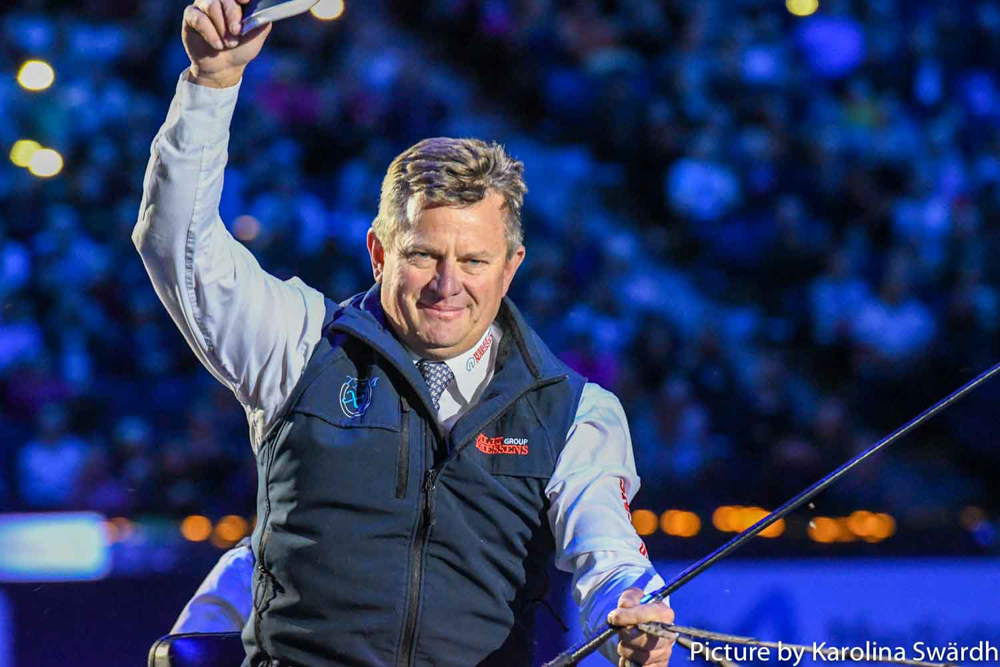 International level 4 Course Designer Johan Jacobs had laid out a nice and fluent course for the six drivers in the Friends Arena, where over 10.000 spectators enjoyed thrilling driving sport: It was a nice, forward built course,” tells Koos de Ronde. “It was nice to watch and nice to drive. And this proves that a course like this does not change the results. The best will win anyway!”

Boyd drove his team of horses including his new leader horse Orias, who he used for the second time: “Sebastian Hess told me that he thought this was a good indoor horse and every show he is getting better and better. He has a lot of speed, but I still have to bond with him a bit more. I deliberately brought my fast and powerful team to Stockholm and I will bring them to Geneva in two weeks because of the big arenas. I will bring my compact team to Olympia and Mechelen because the arenas there are much smaller with tighter obstacles.”

After the first competition on Friday, Koos de Ronde decided to use his experienced horse Oosterwijk’s Kasper in the lead again: “It did not go badly yesterday, but with Kasper it just goes better. I was able to drive accurate and fast and I am very happy. Boyd was a class of its own. I tried to put him under pressure, but he drove just super. I am very pleased with my second place.”

Glenn Geerts was also happy to finish in third place, as he needed the World Cup points. Mareike Harm impressed once again by driving her team at high speed through the course and only came two seconds short to make it to the top three, who started from zero again. Benjamin Aillaud finished in fifth place, ahead of wild card driver Fredrik Persson.