The dressage on day one of the Test Event at Pratoni del Vivaro near Rome was all about elegance. With 28 competitors forward, from a single pony to six horse four-in-hands, the setting of the grass arena surrounded by ancient trees, with the international flags fluttering in the cool breeze, created a picture-perfect scene.


The day’s top score went to Frenchman Benjamin Aillaud and his team of black Arab-Friesian horses. Their black coats glistening silver in the sun, they moved with suppleness and obedience, and were the most balanced and united of the horse fours. They were duly rewarded with a unanimous first placing from all three judges, finishing on 43.78.

Hungarian father and son, Jόzsef Dobrovitz Sr. & Jr. drove safe tests but it was Jόzsef Jr. who was the better, his mahogany brown horses going well together, showing some fine paces, and he was rewarded with second place, although five points behind the leader on 51.89.  With the margins between the remaining drivers very tight, Italian Luca Cassottana was awarded 54.11 and Jόzsef Sr., with a young team who at times showed their potential, was fourth by the smallest amount on 54.22. Anthony Horde from France was fifth on 55.33 and Janόs Papp, the remaining Hungarian driver, was sixth on 58.10.

Change from team to pair

With so little between these talented drivers, the competition between them on Saturday’s marathon over Josef Middendorf’s brand new course promises to be exhilarating.

Sealing a decisive lead in the horse pairs with one of the classiest tests of the day was Misdee Wrigley Miller (USA). Due to arrive with her four-in-hand from Boyd Exell’s base in The Netherlands, one of her horses suffered from travel sickness on the journey, which meant she was a horse down. Misdee showed all her experience of ringcraft to drive her leaders as a pair, with a test she had only learned the day before, and kept a cool head, the horses responding beautifully to her aids.  Her score of 43.97 was just shy of Benjamin’s top slot.

The experienced Jozsef Dibak’s athletic pair so nearly produced a winning performance with some delightful movements, but unfortunately had a couple of costly spooks during the test, ending on 47.01. With a comfortable margin between him and his compatriot Francesco Aletti Montano who sits in third on 52.71, it gives the top three a little leeway on the marathon. With nine pairs forward, this will be one of the most competitive battles on Saturday.

Earlier in the day, the horse and pony singles, and young drivers, got underway with their event, and all will be looking forward to this special opportunity to drive over this newly built championship course. 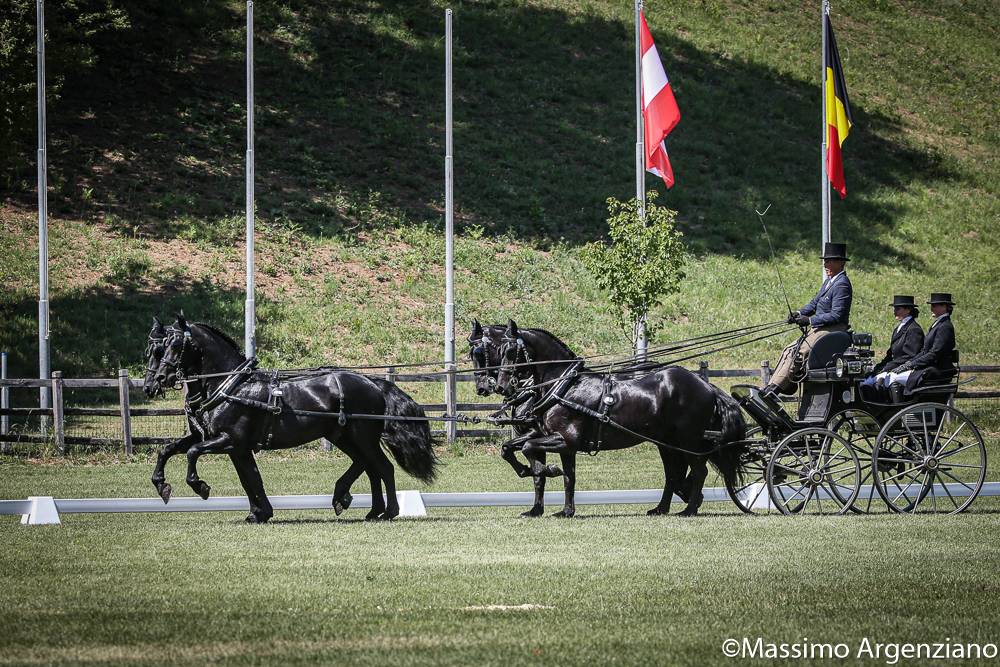