The FEI organised a draw last Monday to determine the legs in which each of the ten drivers involved in the 2019-2020 season of the FEI Driving World Cup would compete. Lyon and its Longines Equita Lyon Concours Hippique International is the first date of the season and will see amongst others three previous winners and the current titleholder compete in the Eurexpo arena. A great atmosphere is guaranteed on Saturday 2 and Sunday 3 November!


The FEI Driving World Cup is reserved for the best drivers in the world. It is a breath-taking discipline, in which drivers demonstrate exceptional speed with their teams on two courses with a drive-off. When a leg of the FEI Driving World Cup was organised in Lyon for the first time in 2018, the stands were full for each of the rounds. “The public in Lyon is incredible. The class on Saturday starts early in the morning and last year, at the beginning of the competition there were a lot people in the stands who encouraged all the teams. It’s very impressive to see so many people who come together for this sport. It’s really magical!” says Jeroen Houterman, the Dutch course designer who will be in charge of the courses this year once again. 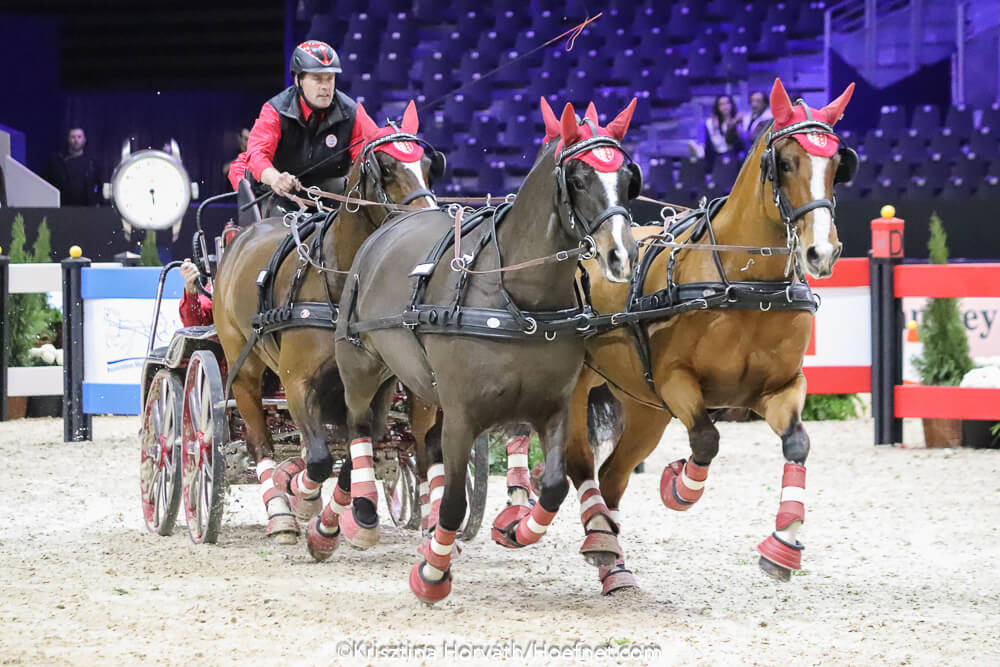 
The stars are there!

Amongst them, three drivers who have already won the title during their careers will come face to face in the FEI Driving World Cup leg in Lyon. The current titleholder, Dutchman Bram Chardon, is back in Lyon and will be up against the legend of four-in-hand driving, Australia’s Boyd Exell who will be discovering the Rhônes-Alpes arena for the first time. And why is he a legend? Because this driver, who lives in the Netherlands, has won no fewer than eight FEI World Cup Driving Finals! Lying in wait is the other Dutchman at the Lyon leg, Koos de Ronde, the winner of the 2013 Final, which will undoubtedly ensure that the competition will be very spectacular. Switzerland’s Jérôme Voutaz, last year’s winner in Lyon, will also be back in the city and will be competing against America’s Chester Weber, Hungary’s József Dobrovitz and France’s Benjamin Aillaud, a real showman if ever there was one. Voutaz is the only amateur (as he does not make his living from driving), a mechanic by day and driver in the evening after doing a day’s work. Can he repeat last years’ success in the face of the great champions? “The result [of the FEI Driving World Cup in Lyon 2018, which he won] proves that with perseverance, hard work pays off in the end,” he said after his victory.

“An FEI Driving World Cup leg is organised in two rounds. On Saturday, the first round allows drivers and horses to get their bearings. The horses have to become familiar with the course, the lights, and the audience, and the drivers try out their teams over the difficulties of the course, which is exactly the same as it will be the next day. The ranking from this first round determines the starting order for the second round. The drivers have fifteen minutes to memorise the course and choose their options. They often try out the tracks on the first day, then watch the videos to decide on the best options for the second round. On Sunday all the drivers have to start again from scratch and go round the course as quickly as possible, without knocking anything over as they go. So everything is possible!”

On Saturday morning the trade show will open its doors at 8am so that the public can watch the drivers parade at 8.20am.