Four times World Champion IJsbrand Chardon from the Netherlands has won the eighth FEI World Cup™ Qualifier at the international driving event in Beekbergen, the Netherlands. Chardon took the lead after the dressage, won the marathon and was 11 points ahead of his fellow competitors before the obstacle driving competition. Chardon again proofed his skills in the cones and secured his third World Cup win after his earlier wins in Windsor and Saumur. With this win at the 25th edition of the CAI Beekbergen, Chardon has taken over the lead from Boyd Exell in the standings after 8 competitions.


Dutch Championship
Chardon not only won the international driving event in Beekbergen for the 8th time, but also won the Dutch Championships for the 21st time in his career. Chardon’s Dutch golden team members in Aachen three weeks ago Theo Timmerman and Koos de Ronde joined him on the Dutch podium.

Swedish competition
Sweden’s Fredrik Persson spoiled the ultimate of a Dutch Top Three result in the international competition by taking the second place in the overall results. Persson had a slow start this season with the 8th place in Windsor. He got eliminated in Vecses after he skipped an obstacle on the marathon course and became 12th in Aachen. Persson, who came 5th in the FEI World Cup™ Final in Göteborg in February, used a new horse in his dressage team in Beekbergen. The six-year-old Swedish Warm blood Don Marcell made his international debut at the grounds of Riant Equestrian Centre and did an excellent job. The former ridden dressage horse was only broken into harness several months ago and has earned a fixed place in Persson’s dressage team for the upcoming events.

Marathon
Due to the very bad weather on Thursday and Friday, the Organising Committee decided to take one obstacle out and to shorten the marathon course. This decision was well received by the competitors and ensured a safe and smooth run of the competition. Despite one or two rain showers on marathon day, the international driving event in Beekbergen attracted some 19.000 spectators. The visitors enjoyed excellent driving sport on a very high level, not only in the horse teams class, but also in the international horse pairs and pony team classes. IJsbrand Chardon, driving with a camera on his carriage for Dutch Television, set the fastest times in three of the six marathon obstacles. Chardon was assisted on the carriage by his wife Paulien and his son Bram, who himself drives a pony team at club level. Frenchman Thibault Coudry, Christoph Sandmann and Theo Timmerman set the fastest times in the other three obstacles, which were designed by German international course designer Dr. Hartmut Kaufmann.

Obstacle driving competition
Christoph Sandmann from Germany took the second place in the standings after dressage and marathon, but in the obstacle driving competition his newly composed team knocked two balls down and Sandmann exceeded the time allowed which made him drop to the 5th place in the final results. Switzerland’s cone-specialist Daniel Würgler set the fastest time in a clear round and won this final competition. 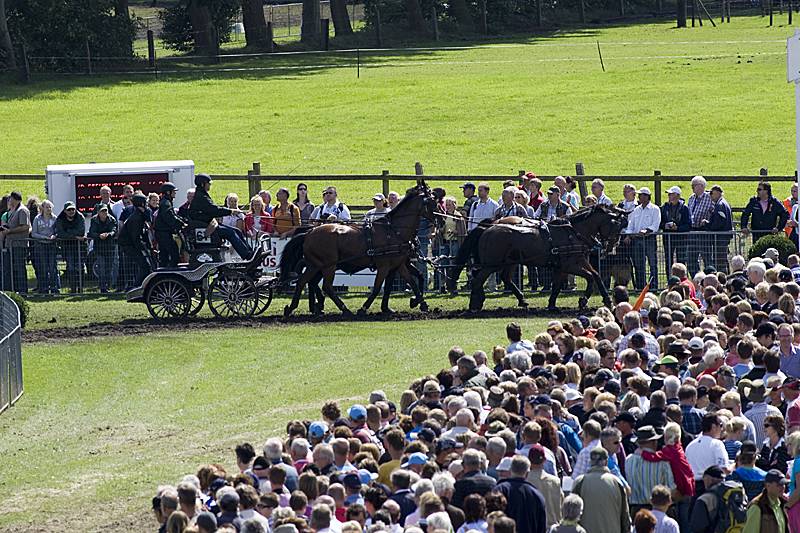 IJsbrand Chardon (NED): “I very much enjoyed competing in Beekbergen. We had some very bad weather during our dressage warm up, but during my test it was dry.”
“There was a very good atmosphere on the marathon day. The number of spectators we have in Beekbergen is unique for our sport in The Neherlands, this is the best PR for our sport.”
“I am very happy with my marathon result. We were very well prepared and I did not make any mistakes. My compliments to the Organising Committee who have managed to build such a fantastic course despite the weather.”

Fredrik Persson (SWE): “I was extremely happy with my dressage results. My new wheeler horse Welldone has been up and down lately, but in Beekbergen he performed very well. Together with my other new dressage horse Don Marcell, I feel I am on the right track again.”
“For me it was good that one obstacle was taken out in the marathon. The grounds were very heavy and since I compete in Riesenbeck again next week, it was good that I did not have to ask too much from my horses in Beekbergen.”

Theo Timmerman (NED): “I started off with the third place in dressage, which went well for me. According to the people who have seen the dressage, I was better than Chardon. But my goal was to come as close to Chardon as possible and I succeeded this weekend.”

Next event
The ninth World Cup Qualifying event takes place at the CAI in Riesenbeck, Germany, from 31 July to 2 August. The last Qualifier is in Donaueschingen, Germany, from 17 to 20 September. The four best results are counted and the Top Ten after Donaueschingen qualify for the FEI World Cup™ Driving season 2009-2010. 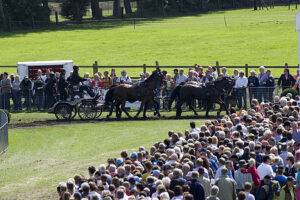