Chablis: Vignaud and Houtappels in form for the World Championships

An adapted marathon course, tropical temperatures, wind and technical courses were all ingredients of the competition this past weekend in Chablis. The single horse division boasted a number of top international drivers.

Hostess Marion Vignaud won the single horse division with one of the two horses she started, Winston. Second place went to Canadian Kelly Houtappels with her superb horse Flip. “It was a wonderful competition,” tells Houtappels. “It was well organized and they really went out of their way to encourage the drivers to socialize and have fun together. The obstacles were well designed; there were so many options almost no one drove the same course.” The Canadian is well on her way to being one to watch at the Single Horse World Championships in Kronenberg this summer. She drove a strong competition with Flip. “I made couple of really sloppy mistakes in the dressage and that was unfortunate”, she commented on her performance.

Due to the extreme temperatures it was decided by the organization to remove Section A from the marathon and instead implement a warm-up of 20 minutes, which was followed by a bit and harness check, and then the opportunity to make use of a warm-up obstacle before beginning on Section B. With the layout of Chablis this worked well, but opinions are still divided on the implementation of this form for future competitions.

“It was difficult to know what to expect,” says Kelly. “Flip is a creature of habit, so he definitely had more stress than normal, but ultimately we were able to prepare well for Section B.” The marathon consisted of five very technical obstacles with inclines and an obstacle on a hill. Marion Vignaud (FR) put down the fastest time in five of the seven obstacles and won the marathon with her horse Winston. Kelly Houtappels moved up to second place behind Vignaud with a third place finish in the marathon.

After dressage and marathon Vignaud was in the lead with Winston and in third place with First Quality. Kelly Houtappels stood in between in second place: almost an identical result as three weeks ago in Saumur. “In Saumur Marion made a mistake in the cones, which I was able to take advantage of and win the competition, but I knew she wasn’t going to let that happen a second time!” tells Kelly “the cones course was very challenging. You had to be constantly turning and the time was difficult to drive. Flip was just fantastic, he worked so well for me and was really having fun!” This resulted in a double clear round, only one of three in the division. Vignauds clear round cemented her win and Houtappels went home very happy with second place.

“We are still working on what the best plan is for the next eight weeks as we work towards the World Championships. But for right now, Flip has had two heavy shows and has earned a bit of rest.”

(use of this article only with editorial approval) 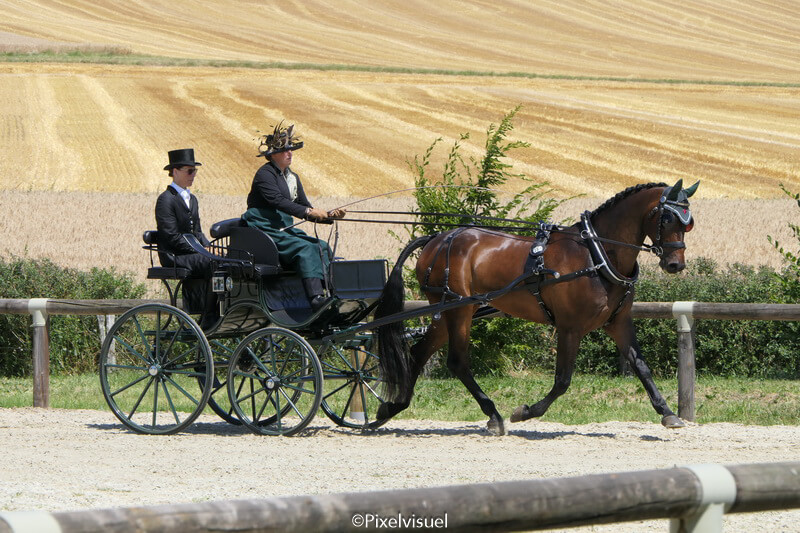