Exloo 2022: Surprising results in the marathon

Inspite of the warm sunny weather and the break in their competition rhythm, the horses and ponies came back fit over the finish line during the marathon. The obstacles were not all too long, but offered many driving options. There were also many balls on the obstacles, and often one fell. There were three mobile obstacles set up, two of which were placed in the main arena. The water obstacle and the two permanent obstacles at the back of the grounds made the marathon complete.

The participants in the two star competition had 5 obstacles to drive. In the single ponies Renate Provoost was well on her way and won the marathon, with that marathon result she is now in the lead. In the pair driving ponies Larissa Reints was once again the best, but just as with the dressage, the difference between her and Jorn van Olst was minimal. She can’t afford to have single ball in the cones. The Swedish driver Are Larsson was the best in the marathon for the single horses. The dressage winner Peter Zeegers was well on the way in the obstacles, but with a large number of faults earned due to a mistake in navigating the course, he unfortunately plunged in the standings. The American Helmuth Raymond is now in the lead.

In the pair driving horses, Wybe Kramer won the marathon and with that, climbed up the standings into second place. Dressage winner Laura Oberlin (GER) drove a solid marathon and is still in the lead. 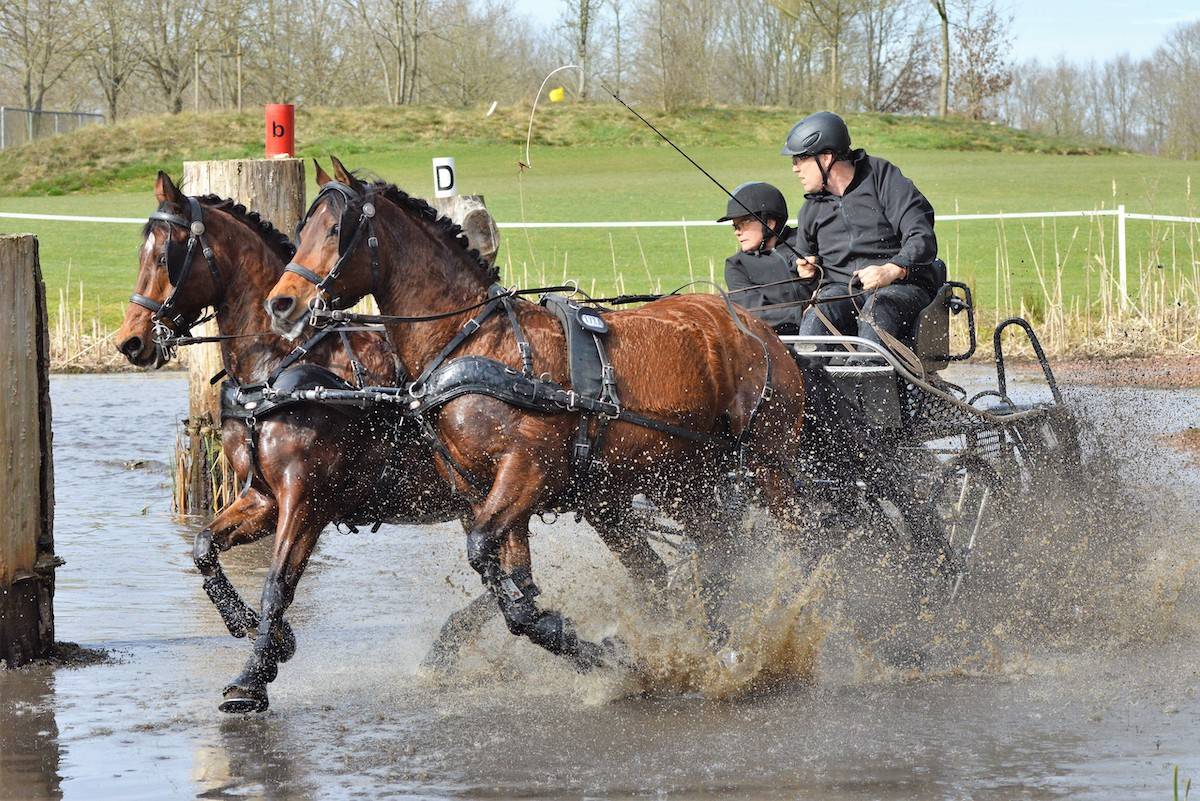 In the three star competition, Marije Willemsen held onto her lead position in the single ponies. With her instructor Jan de Boer as groom, she drove an impressive third in the marathon. The fastest was the Swedish driver Johan Herner, and with that he climbed into second place.

A super result for Sietske Flobbe in the pair driving ponies class. She won the marathon and couldn’t believe her luck. She is now second, after Rodinde Rutjens, who also drove very strong. The fastest obstacles in the four-in-hand ponies were driven by Marijke Hammink, but she had section penalties. With only a slight difference in points the marathon win went to Rene Limpens. His four-in-hand was going well, his obstacle times were closest to Hammink, and he is now in a nice second place behind the world champion.

In 3 obstacles Pieter Karelse and Flynn were the fastest in the single horses. He drove his galloping horse with style, efficiently through the obstacles. He climbed into third place after the marathon. Saskia Siebers is leading the standings. Axel was eager and even though she wanted to drive a relaxed marathon, it was fast and without faults. Rudolf Pestman held onto his second place. He drove a strong marathon, but in the first obstacle he had a close call, and his carriage came momentarily off the ground. Christiaan Provoost and Jaap van der Horst also climbed in the standings thanks to a good marathon.

Finally, in the para equestrian division Ingmar Venemen had a nice win in the marathon. She is now ahead in the standings.