Boyd Exell (AUS) has won the fifth leg of the FEI World Cup™ Driving at London Olympia after an exciting battle with Koos de Ronde (NED) and József Dobrovitz (HUN). Boyd took the top honours, but since he competed with a wild card, the 10 World Cup points went to De Ronde. 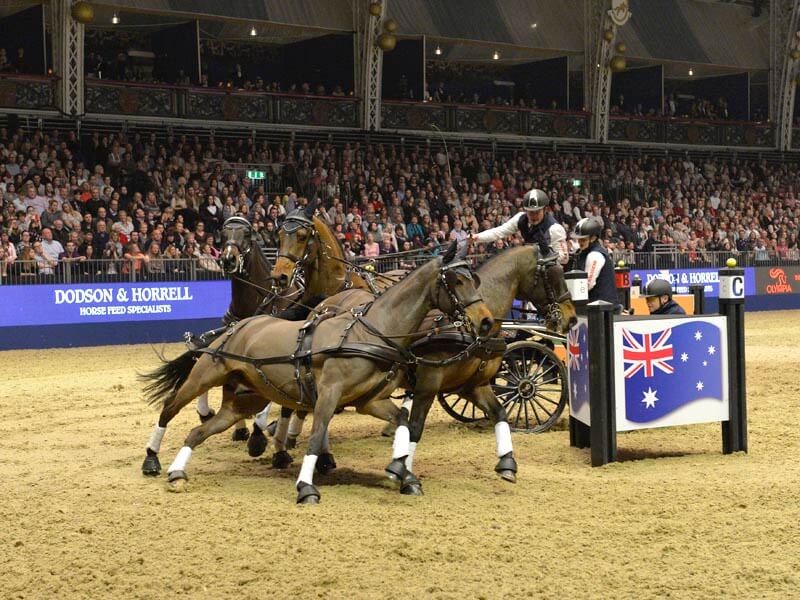 Boyd’s team was ‘on song’ in the electric atmosphere of the London International Horse Show at Olympia on Saturday evening: ”I qualified for the winning round in which I was last to go. I knew Dobrovitz and De Ronde had made mistakes, so my plan was to drive smooth. Half way through the course my back stepper told me I was six seconds up, so in the last phase of the course I did not take any risks.” Boyd finished two seconds faster than Koos de Ronde, thanks to a very clever turn in the first marathon obstacle. It is the third time that Boyd won the FEI World Cup™ Driving competition in Olympia, he also won the editions in 2012 and 2014.

Koos de Ronde’s team went even better than in the first competition, which he had won. Being the last man in in the first round, Koos knew his opponents had driven clear rounds so he had to be fast and clear. Half way through the course he realized his time was good and decided not to take any risks, which resulted in the second place. The three drivers started from scratch again and Koos went for it in the second round, in which Dutch level 4 Course Designer Johan Jacobs had taken two gates out: “I am very pleased with my team of horses, they went very well. I really went for it, but I had an unfortunate knock down in the second obstacle, so the rest of the course I drove fast but without risk, said Koos.” The 2016 bronze medallist at the World Championships has now picked up 10 World Cup points, which puts him in second position in the provisional standings after his win in Budapest two weeks ago.

Jószef Dobrovitz fully concentrated on finishing in the top three in the first round, in which he succeeded. Dobrovitz truly enjoys competing at Olympia and he brought two new horses to London, which only competed in his team twice before: “My right wheeler horse is only young and after three days of competition, he was very tired, but I am very pleased with my horses.” Dobrovitz missed a turn in the second round and had one knock down. Both Dobrovitz and his son József jr. have now finished their four events, Dobrovitz is in second place in the standings and junior in fourth place. It will depend on the results of the other drivers in the next competitions if they will stay in the top 6 to qualify for the Final in Göteborg at the end of February.

Georg von Stein (GER) drove a smooth and clear round, but was not fast enough to qualify for the winning round and finished in fourth place, ahead of Dobrovitz jr., who tried a short cut from obstacle 7 to 8, which cost him a knock down. Second wild card driver Daniel Naprous (GBR) dropped a loop in the first marathon obstacle, turned up his speed but picked up two balls and finished in sixth place. Theo Timmerman (NED) lost precious seconds when he missed a gate in the first marathon obstacle and finished in seventh place.