The Dressage took place at the excellent grass area of the galop race track, and the marathon was a huge folk festival.
The quality of marathon part has increased a lot due to the newly built obstacles. The Hungarian O-Course designer Gabor Fintha flagged a selective and highly challenging course and the large spectator crowd experienced incident-free and exciting marathon action. Due to the location of all 8 obstacles in the centre of the race track it is possible that the spectators experienced the marathon with very close proximity and were also able to participate in the folk- and winefestival which took place in Topo??ianky during the same weekend. These were the ingredients of the special atmosphere of the International driving competition at the Slovakian National stud. 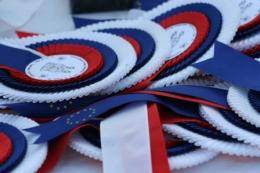 The Slovakian National Championships 2009 for Horse Pairs were also decided during that tournament. There is an excellent development in the Slovakian Driving sport. The expension resulted in 10 competitors competing in the National Championship 2009. The last years champion, the driver of the national stud in Topolcianky – Miroslav Matuška -, had to pass this time the 2009 title on to the new Slovakian Champion Josef Hrouda. However, the title remains in the Topolcianky stud, since Josef Hrouda won with Lipizzianer horses bred by the National stud.

In the supreme discipline, the team competition, the victory was up for grasp until the very last seconds. After the dressage win by Petr Vozab Czech Republic with his wonderful team of Kladruber Stallions from the Czech National Stud in Kladruby, his fellow Czech driver Ladislav Jirgala won the marathon during his excursion into the team driving sport. Ladislav Jirgala, the Czech Horse Pair World Championship driver demonstrated his great talent in the marathon competition.
The overall event was however won by the “old hand” Petr Vozab, Ladislav Jirgala won 2nd place before Piotr Mazurek (POL).

The CAI-A 2009 is over – now Topolcianky is focused on the great upcoming events in 2010.
The project “Donau Alpen Pokal 2010 in Topo??ianky” is in full swing and lots of new aspects and future oriented innovations for a successful future of the moder European Driving sport are in development, planning and partially even already executed.

The Golden Wheel Cup 2009 final results are 100% dominated by Polish drivers.
After the win of the Singe Horse event series by Bartolomiej Kwiatek and the victory of the Polish Team in the National team competition during the Final of the Single Horse Cup at the Hungarian CAIO in Aszar Kisbér, also the results for the Horse Pairs went clearly to Poland.
Victory in the Individual competitions of the events in Kladruby CZE, Conty FRA, Altenfelden AUT and Warka POL and the first place for Jacek Kozlowski in the final at Topo??ianky – the undisputed winning Nation also at the Horse Pairs is Poland.
Second place of the Golden Wheel Cup Pairs 2009 went to Sebastian Bogacz followed by Adrian Kostrzewa, who achieved 3rd place in the final series standing.

Jacek Kozlowski POL – Winner of the CAI A and the Golden Wheel Cup 09 for Pairs.

Adrian Kostrzewa won the dressage with his par of Lipizzaner horses, second place for Sebastian Bogacz.
First place in the Marathon for Jacek Kozlowski, after him Sebastian Bogacz and Arkadiusz Gorski. In the deciding Cone driving Jacek Kozlowski won not only that part of the tournament clearly, but he also secured his overall win at the CAI-A2 in Topo??ianky 2009.
With this triumph the Polish World Champion Team driver and his Polish Warmbloods won also the Golden Wheel Cup 2009 for Horse Pairs!

Susanne Leibetseder from Austria won the Single horse competition, second place for the Polish driver Bartolomiej Kwiatek, who lost a possible 1st place due to an unusual fault in the cone driving competion.
Definitely a highlight in the Single Horse competition was the dressage from Vilmos Jambor (Hungary). He was driving the young Dutch Stallion Vulcano, who was presenting himself at his first Internation Competition as an exceptional horse with very promising potential for the future.
Vilmos Jambor drove to his first dressage victory at a CAI-A. His horse is definitely promising a top future.