Tomas Eriksson from Sweden has won the fifth FEI World Cup™ Qualifier in Altenfelden, Austria. Eriksson was too strong for Jiri Nesvacil sr. from the Czech Republic and Rainer Duen from Germany. Eriksson herewith enters the Top Five of the World Cup™ standings, which are led by Boyd Exell from Australia. 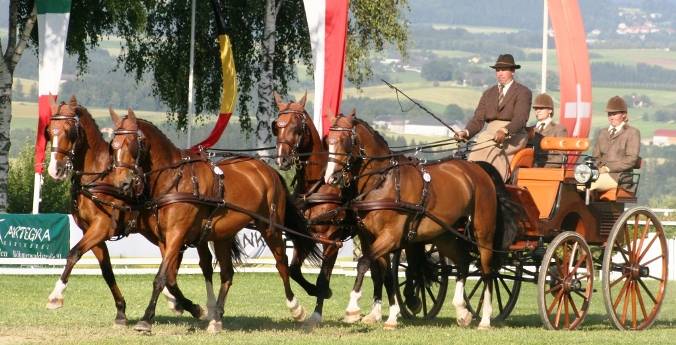 Dressage
Double World Champion Tomas Eriksson was unanimously awarded with the first place in the dressage by the five international judges. Poland’s Piotr Mazurek, a former horse pair driver, was runner up with 7 points difference, followed by Jiri Nesvacil senior.

Slippery marathon
The competition in Altenfelden, which is kindly hosted by the Austrian driving Family Leibetseder, faced some very heavy rain showers over the weekend, which made the marathon obstacles very heavy and slippery. No more than 18 of the 100 turnouts tipped over in the marathon. Germany’s Josef Zeitler with his mixed team of Dutch, Russian, German and Polish horses won the marathon. Tomas Eriksson took advantage of his lead in the dressage and put a new horse in the lead to test. Eriksson came second, ahead of Louis Basty from France.

Obstacle driving
After dressage and marathon, Tomas Eriksson was 18 points ahead of Jiri Nesvacil and the very few penalties in the obstacle driving competition did not endanger his final victory. Nesvacil had moved up to the second place in the standings after his fourth place in dressage and secured this second place, driving his team of Kladruber horses. Rainer Duen was the only driver in the horse teams class who drive a double clear round and this made him climb to the third place in the final standings. Duen competed in Altenfelden with his second team, existing of three horses of his sponsor and one horse of his own to spare his major team for the CHIO in Aachen in two weeks. Duen will compete there individually.

Quotes
Tomas Eriksson
“I am very pleased with my results in Altenfelden. I felt I had nothing to lose in the marathon so I decided to use my dressage horse Daydream (v. DeNiro) in the lead. He did very well, despite the very wet marathon. I am looking forward to the CHIO Aachen, where I will compete with mostly the same horses as in Altenfelden.” 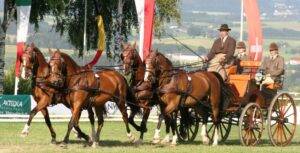