Nicke (1950) started his Driving career as a four-in-hand competitor in 1979 after being a successful show jumper. Nicke successfully represented Sweden at every World four-in-hand Championship from 1980 to 2006 when he retired as an active driver that year. An absolute highlight was when he won, together with his brother Christer and Tomas Eriksson, team gold at the World Equestrian Games on their home soil in Stockholm in 1990. They repeated this at the World Championships in Wolfsburg in 2000, where Fredrik Persson had replaced Christer.

Before retiring as active driver, Nicke already became an FEI Judge and after taking the FEI Course in 2012 with Diana Brownlie, he became a very highly respected and very often seen FEI judge.

“I didn’t know if I could go home”

“I have really enjoyed all these years of judging,” says Nicke. “But the situation around the pandemic has made it more and more difficult to judge. Sometimes I did not even know if I was able to go home from a competition. I often asked myself why I was still doing this and I have come to the conclusion that now is the time for me to stop judging.”

“The most special event I was invited to was Aachen, no doubt about that. After having competed there for 28 years it was an honor to be back as a judge. This is simply the best competition in the world, and I felt proud to be part of it. I also loved going to the USA and to judge there and give clinics. “

We will for sure miss Nicke as a Judge at the international Driving events but we look forward to welcoming him as a Trainer! 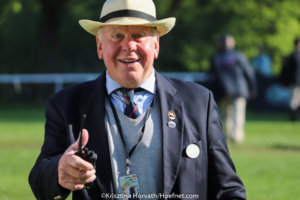