The closing cones competition cemented the gold medal for the German para-drivers with the Netherlands having to settle for gold. In the Grade I division, the gold went to Tracy Bowman (USA) and in the Grade II to Francisca den Elzen (NL).

After an intense marathon yesterday the para-drivers were up again early to tackle the cones.

In Grade I the German driver Patricia Großerichter drove the cones course of her life and was the only driver over the course of the entire day who was able to drive Josef Middendorf’s challenging course clear and within the allowed time. This drive gave her a place on the podium and a bronze medal.

The top of the division remained unchanged as the American driver Tracy Bowman was able to hold onto her Championship title with two knockdowns and the experienced German driver Heiner Lehrter won his second consecutive silver medal.

In the Grade II the cones was once again decisive as the battle for bronze eventually went to Freddy Soete (BEL) who with just a small time penalty edged Ingmar Veneman (NL) off the podium. Ivonne Hellenbrand (GER), driving her first major championship won the silver medal, and reigning World Champion Francisca den Elzen defended her title once again winning the gold with her pony Vandijks Superboy.

The team medals remained unchanged after the cones. The German drivers had more knockdowns, but managed to hold a nine point lead over the Dutch team. 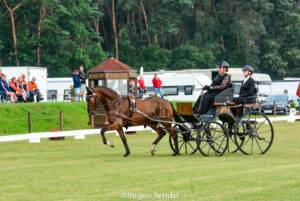